Aurora province is one of the most wildly enticing parts of the Philippine archipelago. All along the coast, the relentless Pacific has carved hollow bases out of the rocky cliffs. Caves and waterfalls wait in the foothills, reef islands are in easy reach, and there are countless coves and beaches to explore. Baler is a burgeoning getaway for surfers and weekenders who love its magical mountain backdrop and small town vibe. Baler has been shielded from tourism by the formidable Sierra Madre Mountain Range for a long time. The town only really came to the attention of holidaymakers when the road there was properly paved. It’s a six-hour ride from Manila to Baler on the comfy Genesis JoyBus (more about transport to Baler here.) You could rent a car and drive yourself — just be aware that the road is a bit testing. About three hours are spent on dizzying turns that snake over the mountains to Luzon’s eastern coast. Now and then, the road opens onto breathtaking views of the valley. You may catch a glimpse of the sea on the other side. If you arrive on a weekday, you’ll find a sleepy town of two-lane roads lined with two-storey houses. Things get busier on the weekends when families and couples arrive from Manila. Within the town there’s a church of humble proportions, a wet market and a surprisingly insightful museum that will give you all the context you need to appreciate your time here.

SEE: 17 Cultural Attractions in the Philippines That Will Draw You In

Coconut production is a major industry in Aurora province, but many of the locals make their living on the water. There’s a fishing village a few minutes from the center of town, where fishermen’s huts perch on rocky coves, colorful bancas rest on riverbanks, and teenagers fish waist-deep in frond-fringed canals. I didn’t come to Baler with high expectations. Even so, it took a few days for this destination to win me over. I spent my first afternoon walking Sabang Beach. A concrete boardwalk lines the shore where restaurants, surf shops and guesthouses overlook the dark sand. In the late afternoons, the light makes grand silhouettes of the Sierra Madre mountains. Surfers paddle out in the misty waves. Games of volleyball spring up, boys skateboard and couples stroll arm in arm, relishing the evening breeze. Sabang is the centre of the action (many amateurs take their first surf lessons here, as I did), but there are dependable swells off Cemento Reef and Dalugan Bay that draw pro surfers during the Amihan season. When Sabang feels too busy, take a short drive or boat ride to the points scattered nearby (more about surfing Baler at this link.)

It’s not easy to overstate just how sleepy Baler feels when the weekend crowd is absent. There are a couple sights that you can cover in a day or two, but what I enjoyed most was the Baler Museum, and driving the roads that led away from the town. On the way, I stopped at fishing ports, took in the view from Ermita Hill, and chatted with the locals about their lives, what they thought about the mayor’s family, and the influx of surfers. After a few days exploring the town, I hired a car to Dicasalarin Cove. When the weather is good you can reach Discasalarin by boat, or by one-lane dirt road that clings to the hills lining the coast. The day I came, the cove was empty except for one group of travelers who were having a picnic in the shade of the cliffs. The cove is guarded by a white lighthouse that leans longingly out toward the Pacific. I loved discovering Discasalarin’s pebbly beach, which on that day was filled with cool, clear water. The entire cove feels like a dreamscape, belonging to itself and cut off from the rest of the world. After a few days I left Baler enchanted. Not just by Dicasalarin and its untouched beauty, but by all the scenes I’d witnessed during my time there. There is something undeniably mystical about Baler and the way it’s managed to hold on to its way of life. I sometimes think I’d like to go back for a whole month, just to surf and soak in those grand sunsets. Baler isn’t going to be the next big thing in Philippine tourism, and I think that’s just as well. 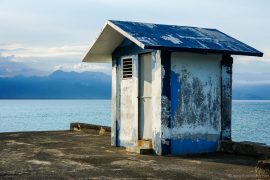 Go Surf + 10 Other Essential Things To Do in Baler 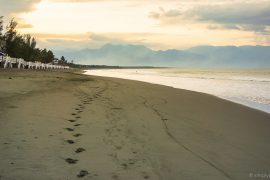 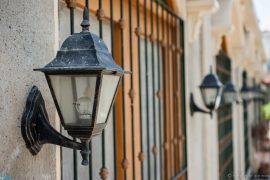 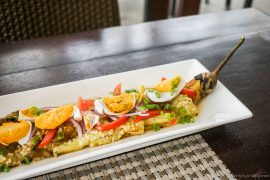